Month-long Give to UC Merced 2022 Launches on Giving Tuesday 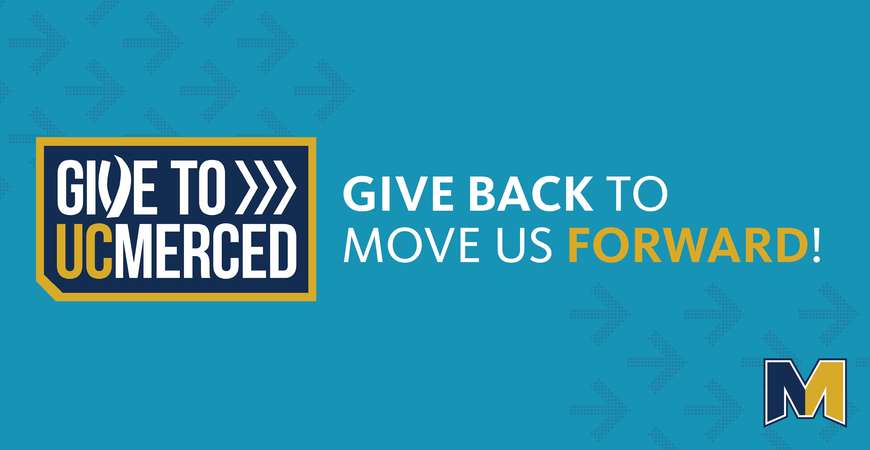 UC Merced's annual Give to UC Merced campaign runs through December. This year's goal is to raise $150,000.

On Tuesday, Nov. 29, UC Merced will kick off the season of giving by launching Give to UC Merced 2022. The campus’s annual fundraising initiative officially begins on Giving Tuesday — the traditional day of philanthropic support held the Tuesday after the Thanksgiving holiday — and lasts until the end of December. This marks the third year in a row that UC Merced is extending the campaign from its original 24-hour period to an entire month.

This year’s goal is to raise $150,000 from 500 unique donors during the month-long campaign, up from last year’s goal of $100,000. Donations can be designated to a wide range of programs and initiatives, including research, academic support and direct financial aid —including scholarships and fellowships — to undergraduate and graduate students.

Additionally, every dollar raised as part of Give to UC Merced 2022 will count toward Boldy Forward, the university’s first comprehensive fundraising campaign, which aims to raise $200 million by 2030.

“The tremendous generosity of our entire campus community is evident in the outpouring of support that we receive every year as part of Give to UC Merced,” Vice Chancellor for External Relations Ed Klotzbier said. “Over the past eight years, Give to UC Merced has raised more than $2 million in vital funding for the people and programs of our university, and I am confident that the momentum will continue and contribute significantly to the ambitious fundraising goals of both the annual Give to UC Merced initiative and our Boldly Forward campaign.”

To participate in Give to UC Merced, visit giveto.ucmerced.edu.