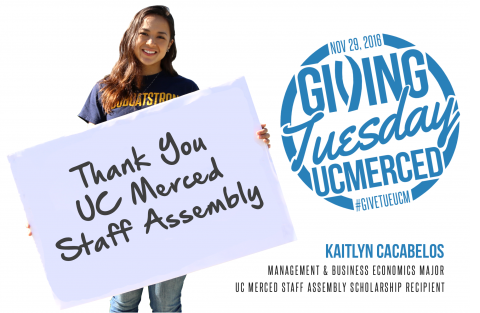 The cost of college is something that weighs heavily on the minds of many families. Nobody understands that better than the faculty and staff at UC Merced, where 89 percent of students receive some type of financial aid.

The University of California system doesn’t offer tuition assistance to the dependents of employees but at UC Merced, Staff Assembly has a scholarship earmarked for students whose parents work here. This year, the scholarship was awarded to Kaitlyn Cacabelos and Tyler Silveira. Cacabelos, a third-year management and business economics major, is the daughter of Sara White, who works in Development and Alumni Relations. Silveira, a fourth-year computer science and engineering major, is the stepson of Lisa Silveira, who works for the Office of Financial Aid and Scholarships.

The Staff Assembly Scholarship for Employees’ Dependent Children is a fund almost entirely supported by the donations of UC Merced employees. Last year, the fund was boosted by its inclusion in the campus’s Giving Tuesday UC Merced campaign, known commonly as #GiveTueUCM. The 24-hour drive is tied to the international day of giving that falls on the Tuesday after Thanksgiving. The campaign allows for donors to earmark their donations to any one – or a number – of funds and have those gifts quadrupled, thanks to a generous 3-to-1 match from Foster Poultry Farms and Wells Fargo.

The fact that her mother’s colleagues have invested in her academic success means a lot to Cacabelos.

“I think that it is amazing that fellow employees are willing to financially assist the children of other employees,” she said. “It shows that UC Merced is one community, that works together and truly cares for one another.”

It’s a sentiment her mother shares.

“Knowing the Staff Assembly scholarship is available to my daughter has given me peace of mind,” White said.

Both students said the biggest effect the scholarship has had on them is alleviating the burden of worrying about finances. “It allows me to focus more on my studies,” Tyler Silveira said. 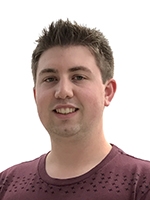 As a scholarship coordinator for the university, his stepmother, Lisa, knows firsthand the impact scholarships make on the students who receive them.

“As an employee, I am especially grateful and have a great sense of pride knowing my fellow co-workers had a part in Tyler’s education and contributed to his success as a student here at UC Merced.”

The Staff Assembly scholarship was first awarded in 2012. It remains the sole purpose for the campus organization’s fundraising efforts. President Pam Taylor said the executive board gets great satisfaction from providing this direct benefit to the students of current staff.

“The idea that we can support the academic aspirations of students whose parents work here is gratifying, to say the least,” she said. “As a board, we’re committed to representing the needs of staff. It took a few years for us to raise the money needed to provide this scholarship. Nothing feels better than seeing it awarded to deserving students year after year.”

The fund is once again part of the Giving Tuesday UC Merced campaign, which can be made starting as early as 9 p.m. PST on Nov. 28, and anytime until midnight on Nov. 29. Thanks to the matching funds, a $25 donation becomes $100.

During the campaign, there will be a giving headquarters known as “GIVE TUE HQ” on the first floor of the Lantern and — new this year — pop-up giving stations available at off-campus sites at Mondo, Promenade and Castle. A special website will be set up that automatically applies matching funds as donations come in. Check email in the coming weeks for the direct link. For more information on Giving Tuesday, email giving@ucmerced.edu.

For employees who want to make regular contributions to the fund, payroll deductions are available via the ePay system.